A small, fairy sized, peep at a new fairy shoe.... 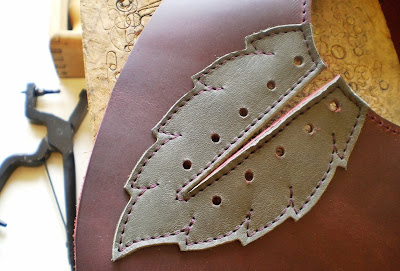 I am still beavering away at my last shoe orders of styles from previous collections.... clearing the way for me to immerse myself (I mean that quite literally) in fairy shoes.....
I tend to work in batches so that I can be as efficient with my time as is humanly (did I say human?) possible.


The picture above shows a sneek preview of PYRAMUS, another fairy shoe which I have to say is rather heavenly, even if I am biased! It has a side opening making the shoe close quite high over the instep. I was keen to get a leafy style into the new collection somewhere, determinded might be a better word! Ive made these in PLUM and a wild sage green which isnt shown on the leathers page. I chose these colours because a very good customer has asked for a damson tree or bramble bush colourway and I felt the need to experiment (what do you think Rebecca?).


You may also notice a few new treasures in the fairysteps shop..... noteably a new fairy bag called JINKY of which 2 have been added, made up in PLUM pull up leather and INKPEN another new style. Its fairy perfect!
Several new bags and a handful of belts and pouches will be added within the coming week.... I may even get some fairy shoes on too.
Share Share on Facebook Tweet Tweet on Twitter Pin it Pin on Pinterest
Back to The Fairy Shoemaker