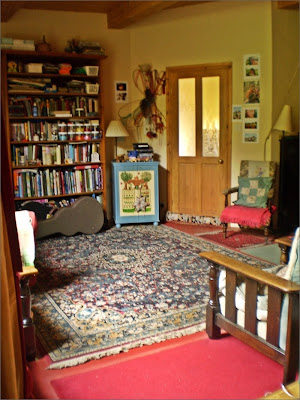 Here is the sitting room one month into the NO HOOVER experiment. Not bad is it!!!

It really has been an eye opener using elbow grease instead of electricity to pick up the dirt.

I can see that my huge rug in the sitting room is totally impractical and that only rugs small and manageable enough to pick up and take outside for a beating would be any good in a no hoover house. It was really hard work brushing it.

All of the other rooms are a doddle, just sweep with the big broom and then use the shovel pan and brush. Even around the Rayburn which we run on wood, (so lots of mess here!) is tidy. I think that actually the house is tidier because of not using the hoover. I use the handbrush to flick over the skirting and ledges now whereas before it was such a fidget changing hoover heads it didnt get done. Shame on me.