MOONSHINE and PEASBLOSSOM fairy boots are walking in my head....

by Unknown 28 August, 2009
I know I said I was going to keep the new fairy shoe collection 'small' but whats a fairy shoemaker to do when her head is full of the most amazing boots... flaunting themselves under petalled fairy skirts?????


Ive had hardly any sleep for a week now, lying in bed making boots in my mind, each stitch methodically made but never real! Ive put them in 'the big book' and decided that today, along with a batch of orders I MUST draft some patterns ready to make them real.
Only drawings here, but they nearly always end up looking identical to the drawings so this is whats coming up!!! 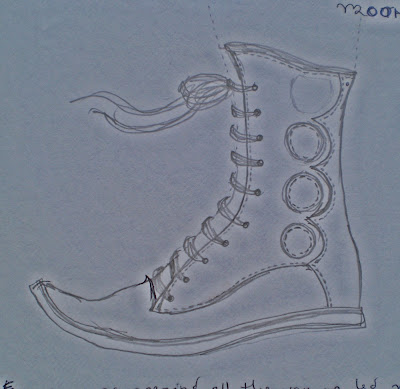 MOONSHINE fairy boots
These are especially for wearing with striped stockings, beloved of fairies everywhere! Based on 2 very popular previous styles from fairysteps, Hook and Tinks. The fronts will be open laced with a small curled front and prickly accents galore on the backstraps which will frame the 3 full moons perfectly. There is more than one moon in Fairyland isnt there? 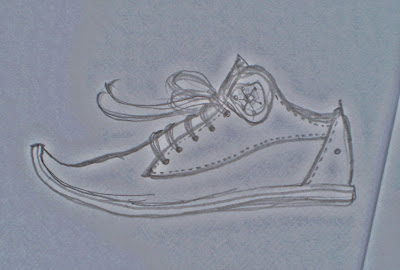 PEASBLOSSOM (my original Shakespeare spells it thus, but I have seen it elsewhere with an extra E????) a slightly shorter boot than Mustardseed. I think the deep back curve suits it rather well. Complete with a Fairysteps poppy on the top outer quarter. I have searched for weeks for quality silk flowers as the decoration for this boot and finally decided that I should make my own leather flowers for them.
Phew! Just got to sprinkle some fairy dust on the drawings now and wait for the magic to happen!
Share Share on Facebook Tweet Tweet on Twitter Pin it Pin on Pinterest
Back to The Fairy Shoemaker