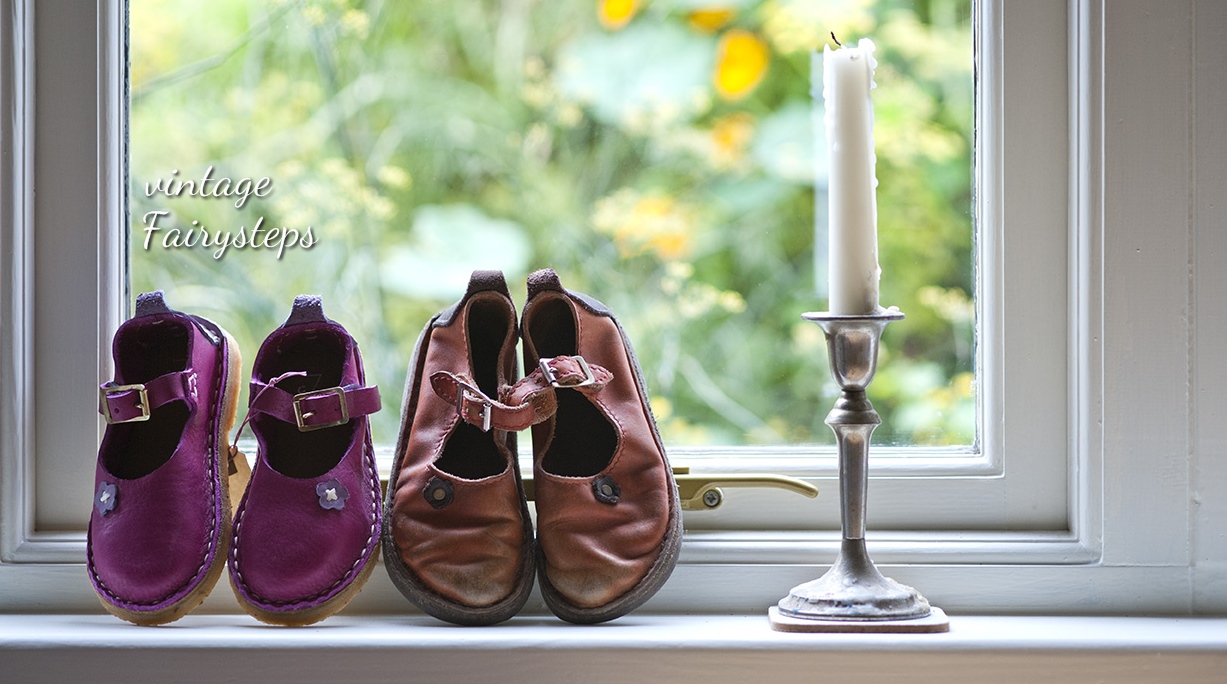 Just a little snippet of history past, where we began to present day. Its been a wonderful journey, and you've been the best of company, thank you x

Inspired by vintage treasures, the classic stories of childhood, and those timeless moments when now and then are one and the same. Established in 2002 the workshop continues to thrive, despite the very obvious lack of Elves...

It all really began though back in the mists of a 1970's childhood, when the world was orange, brown and purple, little sparks of creativity began to form. The colourful little seed that was to become Fairysteps was sown (added Faerysteps in February 2017). Now, days are filled with making treasures for the shop, carefully, prudently, exquisitely in a productive little workshop, deep within the Wild Wood.

I learnt to knit circa 1976 and haven't stopped since, and so, armed with my Ladybird book of knitting I set off to conquer the world... Now, each evening when I down my shoemaking tools, I pick up my wool, hook or needles and make knitwear, carefully designed to perfectly suit the Fairysteps range. I have made so many blankets, hats, vests, cardigans, scarves, etc, that Ive rather lost count. They are everywhere in Fairysteps Land... any part of my life is never very far away from something woolly that Ive made at some point in my travels, or when sat by my fire of a winters evening. Always, after a busy day of making fairy shoes. Here we are up to date. Years of pattern perfecting has brought us to the current collection. Timeless styles, suitable for everyday wear, be it, weddings, dancing at festivals or a day at work, Fairysteps are designed to go anywhere.

We make the shoes from this collection in sizes UK 3 to 8 in timeless colours as limited edition stock. 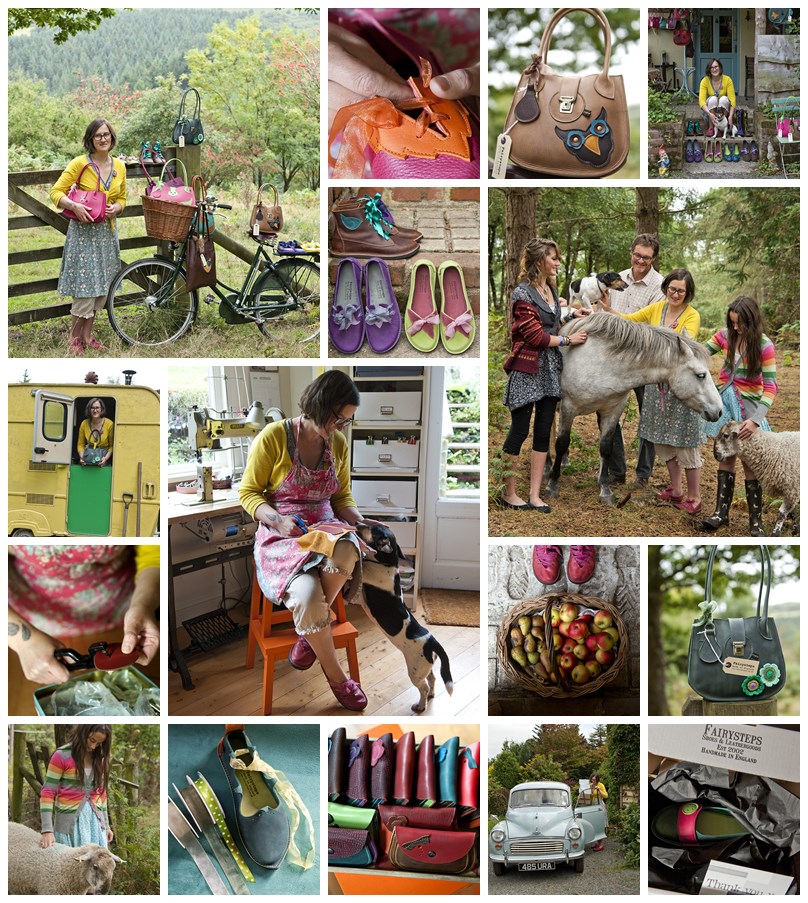 We were very proud to be featured in the May 2014 issue of the Country Homes & Interiors magazine, as part of their 'Country business' series. It was a huge experience with memories that I will always carry. My dear Mother would have been so proud. The shoot was taken back in September of the previous year, so it all seems such a long time ago now... time flies. Sadly our Eldest was at work and unable to take part, so everytime I look at the pictures I just see that he is missing.

The set includes images of our woodland home, the fairysteps workshop, family and of course fairysteps products. Rather too many images of me though... 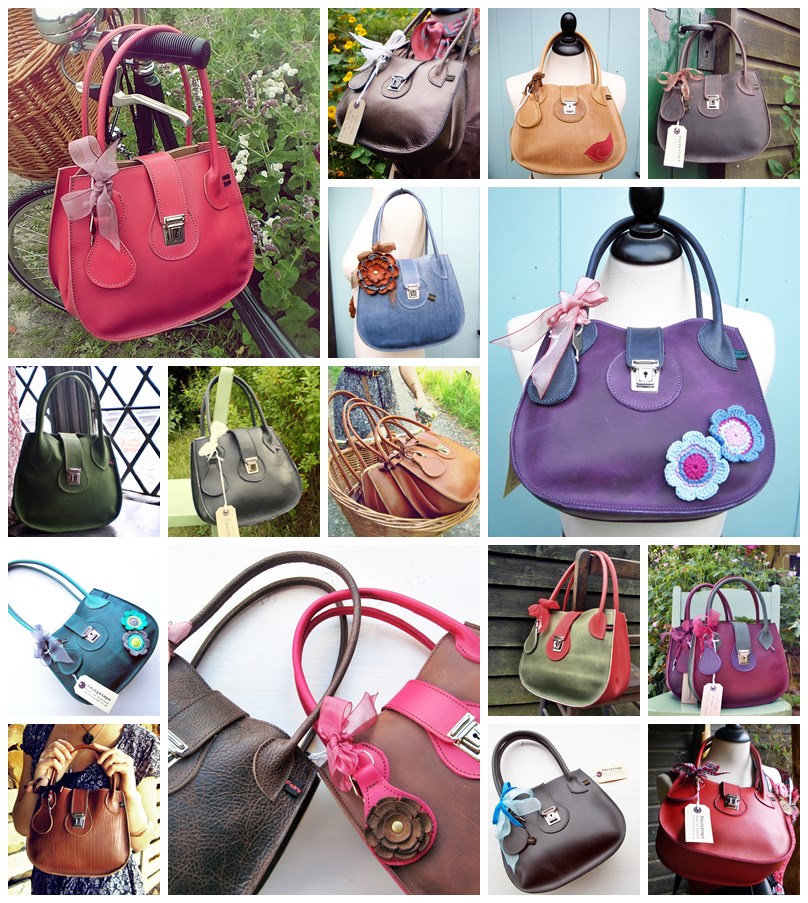 My goodness, it seems like such a long time ago that I made the first Clemmie. She was made in a green grained nubuck, unlined and not terribly brilliant... but she was the prototype and the first one which showed me the way.

I still use her everyday. She is covered in salt stains from an unfortunate episode at the seaside, grease spots from a leaking picnic parcel and numerous other wounds, but I love her still. I haven't the heart to replace her just yet. I feel we have many more adventures to share. Despite her rather crumpled appearance other Women still stare covetously at her...

Over the years I have perfected my technique in making her, and all her varied company. I think its time she had her own dedicated gallery. 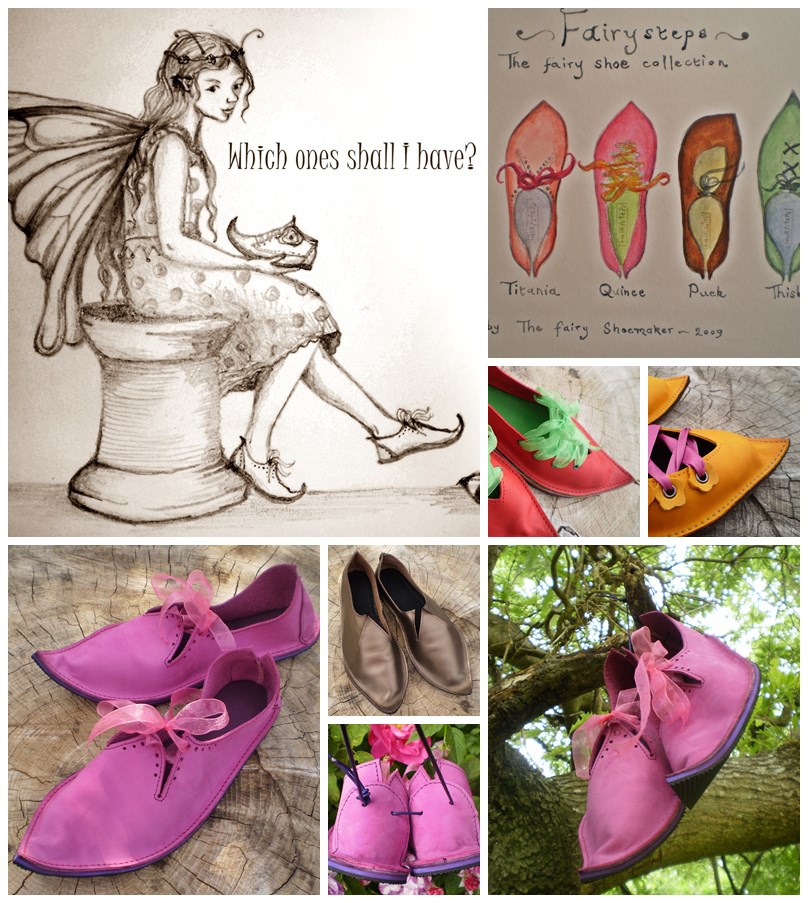 Although I had made the decision to move to fairy and woodland themed footwear in 2005, it wasn't until 2009 that I had my next light bulb moment. It was Midsummer and the fairies were dancing, so there must have been a lot of fairy dust in the air.

I did some little paintings one night of fairy shoes. I went to bed thinking about how pretty they were. I also thought about how complicated they were going to be to make them comfy and safe to wear. Floppy curly toes were going to be great for flying, but what if your wings weren't working?

I made a bronze leather into the first ever pair, called them Oberon, and wore them as slippers. The sole didn't really work and the toe was rather floppy, but it was a start. I wanted to make more.

Titania came next, made in a lovely pink nubuck. She was the first fairy shoe that actually worked as I wanted it to. I was so pleased. I took a million pictures of her next to one of my roses which just happened to be the perfect colour.

My first Mustardseed boot was also made at this time. I used a dark green leather. I can remember them now... All those years ago.

Shoes from the fairytale collection have been sent across the planet. Off on their own magical adventures, traipsing across lands I will never see, listening to music I will never hear, standing under foreign skies. But... in a small way, I feel that each and every pair of the hundreds upon hundreds of shoes that I have made, will take a little bit of me with them. It is a humbling thought and quite possibly, the best way to travel :) 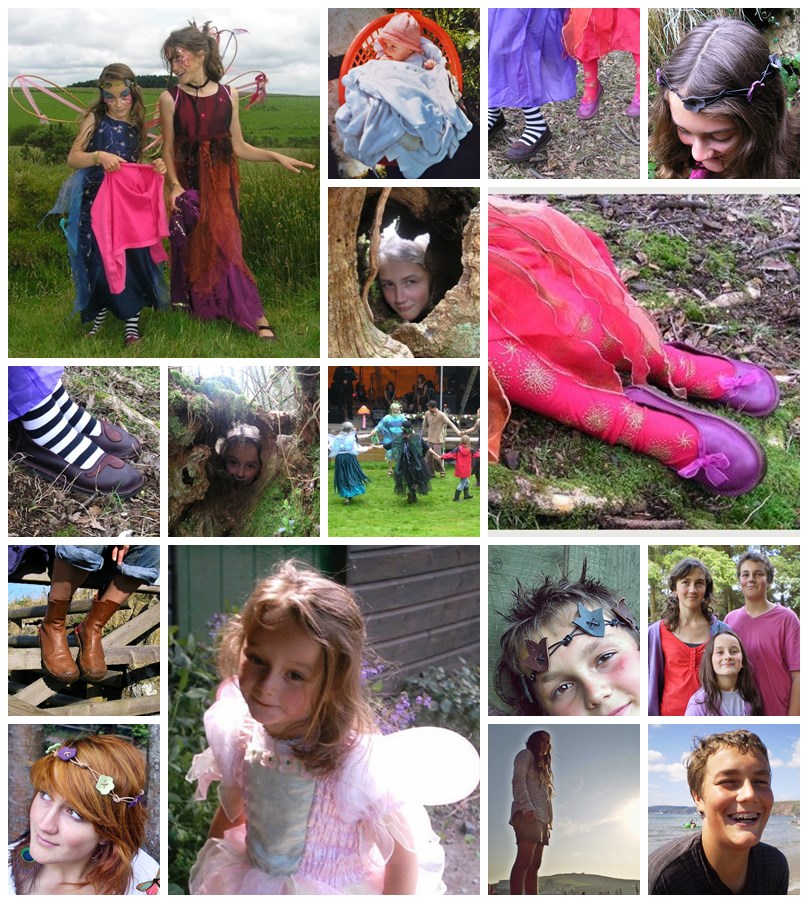 My children have always been a great inspiration to me. They are my greatest makes... I started shoemaking at a time when I was reading fairy tales every evening to tired little people. It started rubbing off...

They tested my first efforts, always enthusiastic and supportive, even when I did once make 2 left boots. They traipsed up and down the woods carrying boxes of shoes, patiently waiting to help model for website pictures. Poor little mites. 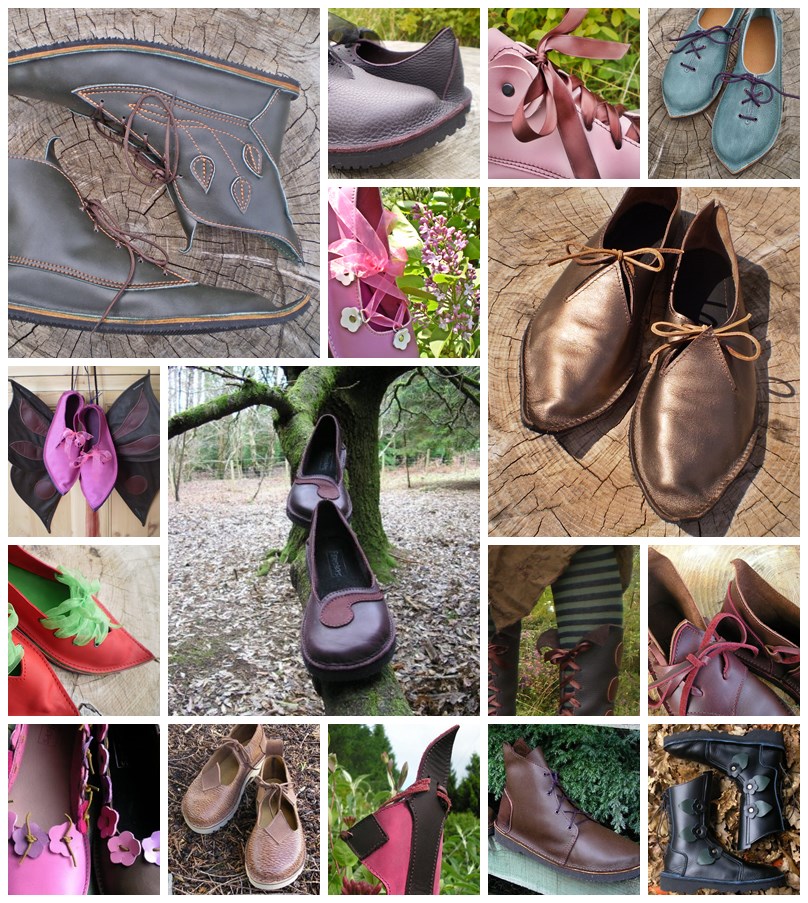 Adding the woodland element to the shoes...

I pride myself on offering original designs with a quirky edge to them. But, it did take me a while to have the confidence and courage to express my designs properly and fully. Initially I held back, and in the early days often tried to follow ‘traditional’ handmade styles. This was never very successful or rewarding for me. Only when I took that leap of faith to make the shoes from my dreams real, did things really pick up.

In fact, it was towards New Year in 2005 that I almost gave up and threw my awl in so to speak. I re branded myself, gave myself a really firm talking to, and decided I needed a focus, an angle, an audience, and a way to make my style of shoes reach the people who they connected to most. 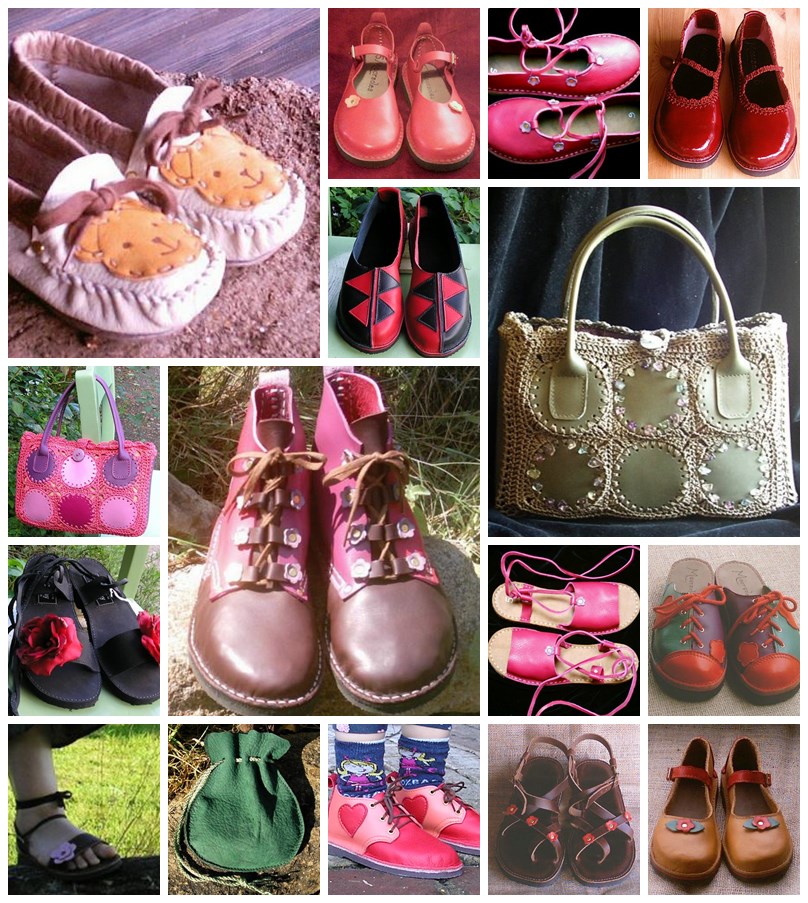 My journey as a shoemaker began. Even though I had dreamed of making shoes since I was 12 years old, it wasn’t until our family started home educating in 2002 that I decided to throw fear aside, and have a go at making footwear for the whole family. It made all of us feel that a self learning journey was ahead, and that the sky was the limit. My husband and I both registered as self employed, I chose to teach myself shoemaking, he continued his work as an engineer, the children turned into hedgelings...

Before 2002 I had never worked with leather, but I had been sewing for most of my life up to that time. I did a weaving apprenticeship on leaving school in an old restored mill which housed community run workshops. In the workshop next to ours was a leather worker, he made veg tanned belts and pouches, but upstairs, was a shoemaker. As it happens, it turned out to be the same shoemaker I had seen at a local craft fair aged 12. I was in fact sandwiched between leather. I would creep up the steep mill steps to the shoemakers attic workshop when she wasn’t there, and look and dream and inhale the wonderful aroma of the hides. I can see now that the seed was sewn many years ago.

I started by buying old leather working books online and reading them in bed, every night... I studied how shoes were put together, I convinced myself that I could make wearable footwear. It was a steep learning path I can tell you. Christine Lewis-Clark was my my first book. It was old and expensive and treasured. I found it very inspiring.

Initially, all of my footwear was hand cut and hand sewn. I was quite keen on the barefoot aspect of moccasins so made the children mocs to start with. They were fun and I would recommend everyone to start with making a pair of moccasins. Hand sewing is hard on your hands, but, it has a huge advantage in that it makes your work portable. Being a busy Mother with 3 young children and a home to look after, portable was good :)

I feel nostalgia and pride looking back at these old pictures. The quality is awful as I only had a 0.5 mp camera with a dial up intermittent internet connection back then. Golly things have changed. Setting up an online business back then was Hard. The capital H is there for a reason. Very few images of my early shoes exist, mainly due to computer crashes, so several in this gallery are from 2004 when I bought my first BIG sewing machine... my wonderful vintage Pfaff post machine affectionately called 'Reggie'. I love Reggie. Hes my right hand man (don't tell Mr Fairysteps I said that).